SANTA FE – During the summer of 2021, Department biologists and conservation officers will be entering the second year of a two-year black bear population estimate study using hair snares in the Gila National Forest. 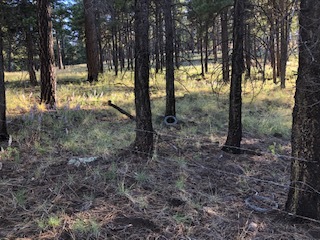 Bear hair snares are a modern study technique designed to collect DNA and allow biologists to identify the number of bears in an area. Starting in early June, Department biologists and conservation officers will set up the hair snares across the Gila National Forest. The hair snares will consist of strands of barbed wire stretched across an area with bait in the middle. As bears duck under or step over the wire a small amount of hair will be collected.
Nick Forman, carnivore and small mammal program manager for the Department said “we had great success last year in the northern half of the Gila National Forest, and we look forward to continuing this year as we cover the wilderness and remaining areas and ultimately get a comprehensive look at the bear population in the greater Gila area.”
BHS1

Summer is the ideal time for these DNA samples to be collected; bears are shedding their winter coats and the snare will pull this loose hair without harming the bear. The study occurs during breeding season when bears are moving more. Biologists will collect the hair which will then be sent for DNA analysis at an internationally recognized lab utilized by many state agencies and universities for their wildlife genetic studies. 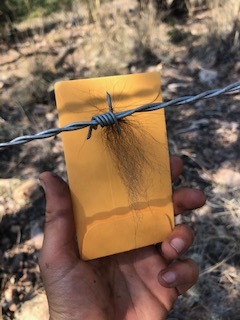 Bear hair snare sites are not located in high human use areas, but if you are recreating in the Gila National Forest and find one of these sites, the Department asks you to not touch the study areas and to make your way around the sites.