Perhaps you’ve driven in southwestern New Mexico and crossed over the Mimbres River and seen that a stretch of it was dry? Perhaps you’ve thought that there was no way fish could live in this river- after all, fish need continuous stretches of flowing water to survive! Well, there are several fishes that live in the Mimbres, including a very rare fish, the Chihuahua chub. 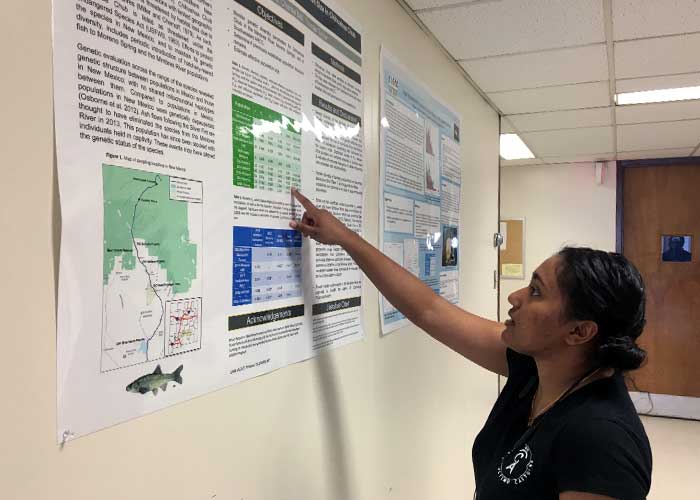 In New Mexico, the Chihuahua chub has been found at a handfull of disjunct sites on the Mimbres River and in an adjacent spring and has also been introduced at a few sites from a captive population at the Southwestern Native Aquatic Resources and Recovery Center (Southwestern Native ARRC). Dr. Megan Osborne and her undergraduate students (Brian Fitzgerald and Charisa Bell) at the University of New Mexico are using genetic techniques to answer some important questions about this narrowly distributed species.

First, how is the genetic health of the Chihuahua chub population? Is there high or low diversity? How well connected are the different populations of Chihuahua chub? What kind of impact did the Silver Fire, which occurred in 2013, have on this species? Dr. Megan Osborne’s team has made excellent progress in answering these questions, enough to have assembled a poster that was presented at a Research Days event at the University of New Mexico in spring 2019. Thus far, it is looking like there has been relavitely consistent genetic diversity over time (which is good). However, the fire and post-fire ash flows and stocking of fish from the captive population at SNARRC effectively removed the previously extant genetic structure among different populations. It appears that fish are navigating from the lower to the upper known populations of Chihuahua chub and that the genetic signature is now largely driven by the fish that were released from Southwestern Native ARRC after the Silver Fire.

Learn more about the non-profit Share with Wildlife program of the New Mexico Department of Game and Fish, supported exclusively by donations.
NM Game & Fish2019-12-27T13:27:10-07:00