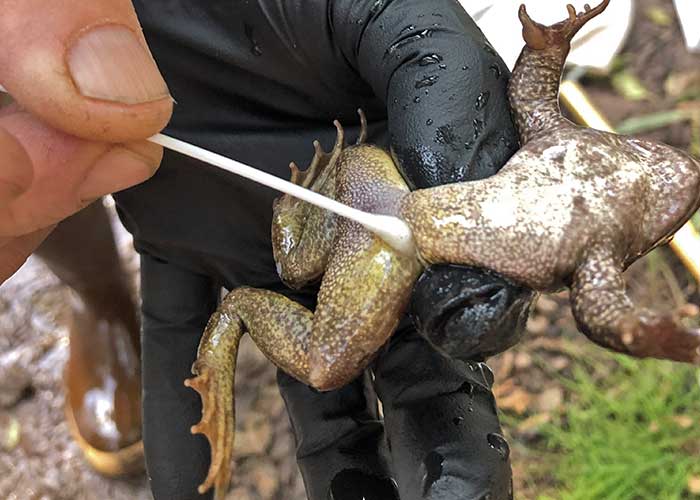 Swabbing the ventral side of a Chiricahua leopard frog. (Eric Christman)

Chytrid fungus can have catastrophic impacts on amphibians. This fungus (Batrachochytrium dendrobatidis; Bd for short), has been documented in New Mexico in a variety of species by a number of different researchers. It has been documented as leading to the decline of species such as the boreal toad (Anaxyrus boreas), which was formerly found in many areas of Colorado and Wyoming and has experienced declines of 80% and 94%, respectively, in distribution and abundance in those states. Similarly, the Chiricahua leopard frog (Lithobates chiricahuensis) declined from approximately 250 localities in New Mexico to 20 between the 1970’s and 2000, with Bd thought to be the leading cause of the decline. Given the threat that this fungus poses to many species, more information on its distribution and presence in New Mexico would be very useful in guiding amphibian management efforts in New Mexico.

Bruce Christman and Dr. Randy Jennings, both experienced herpetologists, have been using funds from the Share with Wildlife program to compile all known records of chytrid fungus presence or absence in New Mexico into a single dataset that can then be mapped across the state. They have compiled over 1,800 data points for 21 of the 27 species of amphibians known to occur in New Mexico. These data points have been put into both a spreadsheet and a data layer that can be used in making maps of sampling efforts to date. 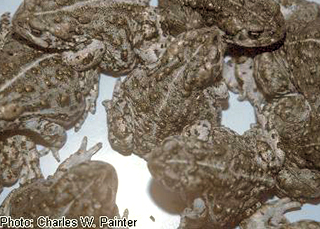 Boreal toads, which have declined due to Bd infection. (Charles Painter) 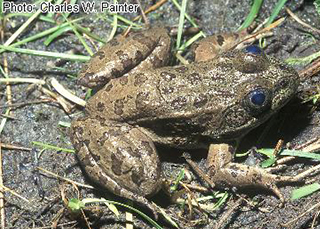 Chiricahua leopard frog, the first species on which Bd was detected in NM. (Charles Painter)

Data collection is still underway for this project, but the final results should prove very useful for the Department’s amphibian and reptile biologist as he works to conserve sensitive species around the state and determine where future data collection efforts for amphibians will be most effective. 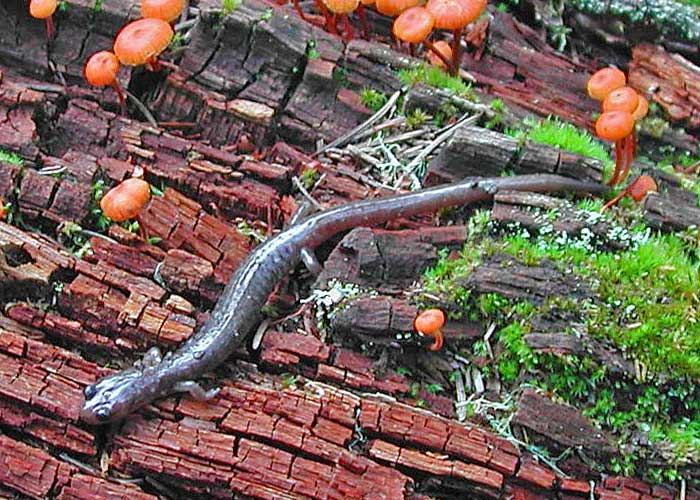 Jemez Mountains salamander. Bd was detected on this species in 2005. (Mark Watson)

Learn more about the non-profit Share with Wildlife program of the New Mexico Department of Game and Fish, supported exclusively by donations.
NM Game & Fish2019-04-04T09:10:01-06:00