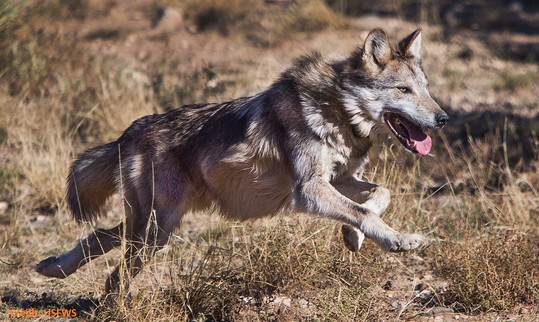 A male Mexican gray wolf tries to elude capture inside an enclosure at Sevilleta National Wildlife Refuge in New Mexico, Wednesday, November 8, 2017. The wolf was to be transported to the Endangered Wolf Center in Eureka, Missouri, for breeding purposes.

NEW MEXICO – The U.S. Fish and Wildlife Service, Arizona Game and Fish Department (AZGFD), New Mexico Department of Game and Fish (NMDGF), and the Ministry of Environment and Natural Resources (SEMARNAT) through its National Commission for Natural Protected Areas (CONANP) and the Directorate General for Wildlife, have signed a Letter of Intent (LOI) establishing the intentions of all parties to collaboratively continue to conserve, manage, and recover the Mexican wolf in the U.S. and Mexico.

“This Letter of Intent provides a positive step forward in our binational efforts to recover the Mexican wolf,” said Service Director Martha Williams. “Together we present a united effort committed to recovering this subspecies both here in the United States as well as in Mexico.”

The U.S. and Mexico have collaborated on a binational recovery effort for the Mexican wolf since its listing under the Endangered Species Act in 1976. The 2017 Mexican Wolf Recovery Plan, First Revision (revised recovery plan) established a binational recovery strategy for the Mexican wolf in both the U.S. and Mexico. Participants to the LOI collaborated in the development of the recovery plan, which calls for the establishment and maintenance of a self-sustaining population in each country. Partners in the U.S. strongly support the establishment and maintenance of viable populations of Mexican wolves in both countries, while recognizing differences in habitat availability, land tenure, agency structure, and Federal laws.

The LOI is a mechanism to demonstrate continued support for the binational recovery effort. Specific conservation and management activities laid out in the LOI to be carried out by participants will advance the implementation of the recovery plan and contribute to achieving the plan’s recovery criteria in both countries. The Service, NMDGF, and AZGFD signed the LOI at a signing ceremony in New Mexico in early June, followed shortly by partners signing in Mexico. A copy of the signed LOI can be found here: https://www.fws.gov/media/us-mexico-letter-intent-mexican-wolf.

Last year in 2021, the U.S. population of Mexican wolves continued to experience growth with a minimum of 196 wolves recorded. Mexico celebrated its 10th anniversary of releasing wolves to the wild and reported at least 40 wolves in the wild at the end of 2021. The Service worked with Mexico to release four adult wolves into Mexico in 2021.

Participants jointly developed the LOI under the auspices of the Canada-Mexico-United States Trilateral Committee Working Table for Species of Common Conservation Concern.